Are Inheritances Split in a Texas Divorce? 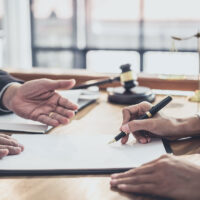 Texas is a “community property” state. Most people have a general understanding of what that means–spouses split their property when they divorce. The specifics, however, can be a bit more nuanced, and there are exceptions to the general rule. Where does inheritance fall? Is your spouse entitled to half the value of your childhood home if you inherited the property during your marriage? Continue reading to learn about how inheritances are treated in a Texas divorce.

The General Rule: Everything Acquired During Divorce is Community Property, With Exceptions

Property acquired before marriage is considered “separate” property, not subject to division upon divorce. Property acquired after the complaint for divorce is filed but before the final judgment is issued may be treated as separate, although the issue is more complex.

The Principal Exceptions: Inheritance and Gifts

The Exception to the Exception: When Is Inheritance Treated as Community Property?

The law is rarely clear-cut and simple. Although inheritance is the main exception to the community property rule, there are limitations to that exception as well.

If a will specifies that the property is bequeathed to both spouses or their entire nuclear family, then the property would not be treated as a separate asset. The fact that the decedent was the relative of only one spouse does not change the analysis. It’s only separate property if it was acquired through intestate succession or the spouse was specifically identified in the will.

If one party inherits cash, for example, that money would be separate property. If the cash is deposited into a joint bank account held by both spouses, however, or the money is used to pay off a marital debt, then the inheritance may become a community property asset. Similarly, if one spouse inherits a house and the married couple uses significant marital funds to fix or improve upon the house, the house may be treated as community property. To keep inheritance separate, it must be kept separate and apart from marital assets.