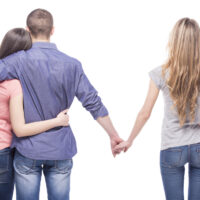 The times are changing, and relationships are evolving.  It is becoming more common for the makeup of a family to look notably different from the traditional, 1950s-style nuclear family.  There are certain types of relationships that the law, however, refuses to recognize on public policy grounds.  If you are in a three-person relationship, or you and another person are both married to the same man, do you have any legal rights?  Continue reading for a discussion of bigamy in Texas, and reach out to a knowledgeable Houston divorce and family law attorney for help with a family law matter.

Bigamy is Not Legal in Texas

The Texas Family Code permits each adult to enter into a single marriage with one other person at a time.  According to the Family Code, you may not be married to multiple people at the same time.  Entering one marriage prevents you from having a legal marriage to anyone else until you legally end the prior marriage.  Marriage to two people simultaneously is known as “bigamy” and is prohibited under Texas law.  Bigamy is actually a criminal offense under Texas law, although the defendant can escape conviction if they reasonably believed they were not already married when they entered their second marriage.

Bigamy can occur when someone moves from another state and enters into a common-law marriage with someone in Texas, ignoring their prior marriage, or when, for example, someone erroneously believes their previous marriage was legally ended, but for some technical reason the divorce or annulment never took effect.  Bigamy or polygamy can also be a choice.  Regardless of the circumstances, if someone is already married, any subsequent marriage will be considered legally null and void.

Accordingly, if your husband is already married to someone else at the time you marry him, then your marriage is not legal.  You will not have any rights as a spouse–you will have no right to alimony, to marital property, retirement benefits, medical decision-making, health insurance, or any other rights attendant to marriage.  Any income your partner earns will be the marital property of their legal marriage, not your relationship. There is one helpful exception under Texas law:  If the previous marriage ends by death of the other spouse or dissolution, and the participants of the latter marriage already live together and represent themselves as married, then the second marriage will automatically be converted into a common-law marriage beginning on the date of the end of the first marriage. This exception is limited to people living in Texas.

If you are concerned about your financial situation and you are in a bigamous relationship, you have limited options from a legal standpoint.  You can leave the relationship or try to convince your partner to end their other marriage legally.  Absent your legal marriage to that person, your rights are severely limited.

Child support, notably, is not limited by marriage.  If you have a child with a person who is married to someone else, you can seek a legal declaration that you are one parent, and the other person is the legal second parent.  Regardless of their marriage, you will have rights and responsibilities as a parent, as will they; you may be able to file for child support if you are the custodial parent, or for custody and visitation if you are not the custodial parent.

If you’re facing child custody, divorce, or other family law issues in Texas, get legal help protecting your rights by contacting the passionate, dedicated, and effective Houston family law attorney Maria Lowry at 713-850-8859.

By Maria Lowry | Posted on January 30, 2020
Skip footer and go back to main navigation