Is Wage Garnishment Allowed in Texas? 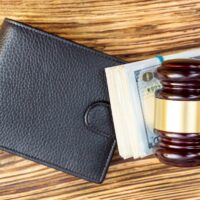 If you are facing mounting debts, whether from divorce settlements, overdue taxes, medical expenses, or unpaid credit cards, you might be concerned that your creditors could undertake a variety of collection efforts: property attachment, repossession, bank account freezes, etc. One of the most frustrating forms of debt collection is wage garnishment. Wage garnishment allows a creditor to bypass a debtor entirely and collect straight from the debtor’s paycheck. Different states have different rules concerning how wage garnishment works, and whether it is allowed at all. Below, we discuss wage garnishment as a means of debt collection in Texas. Contact a Houston debt relief and consumer bankruptcy lawyer to discuss your options for a brighter financial future.

What is Wage Garnishment?

Wage garnishment is a court order that a creditor sends to a debtor’s employer. The order directs the employer to withhold a portion of the debtor’s wages and send the funds directly to the creditor.

Wage Garnishment in Texas is Limited

If your employer receives a garnishment notice for other types of debts, such as for unpaid medical bills or credit card debts, they are not required to honor them (unless ordered by a court in a very unusual circumstance). If, however, you owe back taxes, student loans, or funds from a divorce settlement, your creditor might be able to garnish your wages. Additionally, the government does not need to obtain a court judgment before garnishing wages for student loans or unpaid taxes. A former spouse or co-parent must obtain a court judgment before garnishing wages for child or spousal support.

Cap on Wage Garnishment in Texas

In addition to limitations on the types of debts for which garnishment is permitted, Texas law also limits the amount of a debtor’s wages that can be garnished. For unpaid student loans, the federal government can only withhold up to 15 percent of a debtor’s disposable earnings, up to a maximum of 30 times the federal minimum wage. As much as 50 percent of a debtor’s disposable earnings can be garnished for child support and alimony obligations. For back taxes, the limit depends on a variety of factors specific to the individual debtor. “Disposable earnings” refers to the income remaining after deductions for legally-required items such as taxes, union dues, workers’ comp, insurance, and others.

If you are struggling with consumer debt, speak with a compassionate and effective Texas consumer bankruptcy and debt relief attorney at the Houston Law Office of Maria S. Lowry by calling 713-850-8859 today.